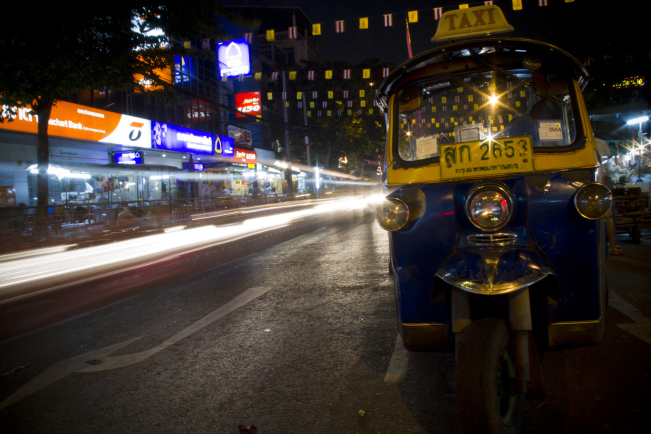 When is the best time to visit Thailand?

When is the best time to visit Thailand?

Thailand at a Glance

People, History & Culture: Originally from southern China, the people that now make up the Thai population began migrating south to modern-day Thailand around the 7th Century. Since then, the nation has been the center of a great deal of foreign conflict, but remains the only Southeast Asian country to have never been under European colonial rule. Instead, Thailand served as a neutral ground between the British and French colonial states on its eastern and western borders. This independence is a source of pride for many Thai people, and visitors will likely experience this pride when visiting museums, cultural relics and national landmarks here

Thailand’s geography that borders South and Southeast Asia has also had a profound effect on Thai people, where cultural diversity is beautifully interwoven with a strong sense of “Thai-ness”. This dynamic juxtaposition between cultures and bordering nations makes Thailand a fascinating place to travel through, since this cultural diversity is highlighted by its dynamic geography as well.

More than anything, visitors to Thailand will find the Thai people’s relaxed and joyful attitude towards life the most apparent. Locals cherish a cheerful and carefree lifestyle, and have a knack for making you smile even during the shortest of exchanges. So effervescent are some Thai locals that Thailand is sometimes referred to as the “Land of Smiles”!

Geography: Thailand’s national borders resemble an elephant head, and is situated in the heart of Southeast Asia. The country borders Myanmar to its north, Cambodia and Laos to the east and Malaysia to the south – and its location among these nations has played a unique and fascinating role in its cultural development. It’s also the only land that connects Malaysia and Singapore to the rest of Asia, which played an important part in its trade.

Transportation: Transportation throughout the country is at once varied, chaotic and exciting. You can cruise on a longtail boat down a famous river, fly up and down Bangkok’s streets aboard a tuk-tuk and off-road in an open pickup truck through the jungle.

Between cities – from Chiang Mai in the north to Phuket in the south – planes, trains and buses offer vastly different experiences. The major cities have train and bus terminals, and you can fly to Phuket, Koh Samui, Surat Thani, Bangkok and Chiang Mai on a number of airlines. Once in the south, a handful of ferry lines offer services between all of Thailand’s islands, from the Andaman Sea to the Gulf of Thailand. Price and speed vary, but when the long journey involves sitting on a ferry deck as it whisks you across the calm blue waters from one spectacular island to the next, it’s hard not to enjoy the ride.

Within Thailand’s cities, particularly Bangkok, tuk-tuks are the most popular form of transpiration. These open-air carts move at breakneck speed, but offer more safety and comfort than its motorbike counterparts. But beware – in Bangkok, traffic congestion can reach astounding levels, so the sky train and metro (MRT) is sometimes the easiest and fastest way to travel. 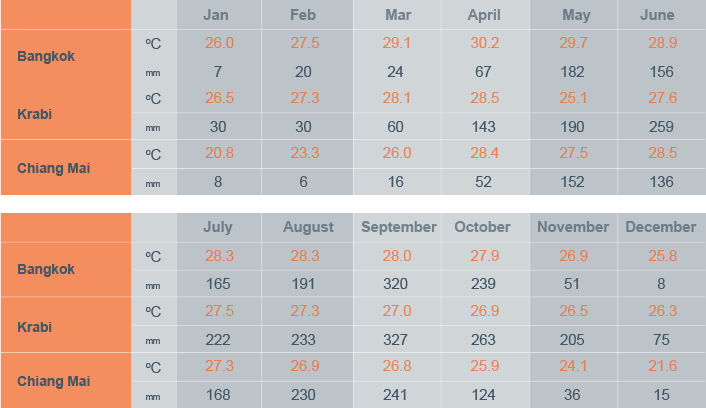 Given its tropical setting, the climate of Thailand is always relatively hot and humid. However, Thailand’s weather can be divided into three major seasons: a cooler season, a hotter season and a rainy season. In its southermost region, the weather varies much less than its central cities, and the cool breeze in the northern mountains always offers a great respite from the hot cities.

From November through February, rain is less common and typical temperatures are a bit cooler. This season is the most popular for tourists, and often the most expensive when booking flights and accommodation.

From March through June, the climate of Thailand reaches its peak temperatures, getting as high as 40°C. Sitting on the southern beaches at this time of year can be great, but plan to take a lot of breaks for refreshing drinks if exploring Bangkok in this season.

Beginning in July and lasting through October – though the peak of this season doesn’t happen until September – Thailand experiences a higher number of monsoons. Make sure to come prepared with rain-ready clothing and a raincoat or umbrella.

Thailand is a land of festivals, with various Buddhist festivals and cultural events taking place year-round throughout the country. The most important festival in Thailand is Songkran, the celebration of the Thai New Year that’s based on the Buddhist solar calendar. The name Songkran comes from the Sanskrit word meaning “passing” or “approaching,” and the festival takes place in mid-April. Water is an important element of Songkran, symbolizing cleansing and renewal. Families traditionally spend the holiday together, and splash water on Buddha images in homes and temples. In recent years, the festival has evolved into a water fight of epic proportions throughout Thailand.

Another time to celebrate in Thailand is Yi Peng (in the north) and Loi Krathong (in the rest of the country) — together, these comprise Thailand’s Festival of Lights. During the Festival of Lights, which takes place on the evening of the full moon of the 12th month in the traditional Thai lunar calendar, people release khom loi (lit lanterns) into the night sky or krathong (small floating vessels made of banana stalks and decorated with flowers and candles) into bodies of water. The effect is extraordinary, as thousands of lit-up vessels float across the waters or up into the air.

Other important holidays include:

Top places to visit in Thailand

A bustling, colourful metropolis, Bangkok boasts glistening golden temples to towering modern skyscrapers, and is perhaps the liveliest of the cities in Thailand to visit. It is where historic Thai culture and Asian modernity converge, leaving in this merge a blend of lights, delicious food and exciting adventure. Nestled on the majestic Chao Phraya River, Bangkok also has a fascinating history centred around its waterways and canals, where you’ll still find beautiful floating markets.

Krabi’s is arguably the epicentre of Thailand’s abundant natural beauty -and rightfully so. With dozens of statuesque islands just off its shores, incredibly lush scenery and westward facing beaches that are host to some of Thailand’s best sunsets, there is no shortage of things to see and do in Krabi. Whether relaxing on one of Krabi’s trademark beaches, braving the world-famous rock-climbing walls, or enjoying a multi-day cruise around the islands, a holiday in Krabi is a perfect getaway destination.

A painless flight from Bangkok to the Surat Thani Province will take you to the Gulf of Thailand, home to a string of scenic islands that boast some of Thailand’s best wilderness. Here you’ll find the former hippie town of Koh Samui, which is now one of the most popular luxury getaway destinations in the area. Head to Koh Tao for some of Thailand’s best snorkeling and diving, and explore Khao Sok National Park for a glimpse at Thailand’s magical jungle scenery.

Few places in Thailand are more synonymous the term “getaway” than Phuket. As Thailand’s largest island, Phuket has one of the country’s most easily accessed waypoints that makes it a perfect stop-off during a journey through Thailand. Phuket is often considered the most developed island in terms of infrastructure and tourism, but getting away from all of the hustle and bustle is surprisingly easy. Put Phuket on your list if you’re looking for a quick getaway or a longer, cultural exploration.

The largest city in northern Thailand, Chiang Mai ranks on Trip Advisor’s list of “25 Best Destinations in the World.” A city bursting with fascinating history as the former capital of the Lanna Kingdom, modern Chiang Mai possesses incredible ancient architecture found in its elegant temples and palaces. Chiang Mai is also a great place to sample Thailand’s most delicious food, with a special northern flavour. Not far north is also Chiang Rai, where you’ll find Wat Rong Khun, also known as the White Temple. Or, head south for the lush green scenery at Doi Inthanon National Park.

Top things to do in Thailand

Walk and Eat Your Way Through Bangkok

Bangkok’s food scene truly runs the gamut. On a food tour through Bangkok, experience the best of Bangkok’s bites in just a few hours. You can discover the foods and traditions of the Thai Chinese in the city’s bustling Chinatown neighborhood or dive into the rich cultural history of Bangrak on a tasting tour through one of Bangkok’s oldest neighborhoods and culinary melting pots. For an adventurous twist on the standard food tour, head out for a thrilling tuk tuk ride through Bangkok’s vibrant evening streets and best evening eats.

Exploring the historic city of Chiang Mai from the seat of a traditional samlor is one of the most exciting ways to experience Chiang Mai’s fascinating architecture. While weaving through the city’s cultural centre, down the banks of the Ping River and to numerous temples and historical sites, you’ll likely catch a glimpse of the city’s charming back streets as well as its top spots. See Wat Chedi Luang. the hilltop Wat Phra That Doi Suthep and the lion statue-flanked Wat Phra Singha along the way.

Island Hop in the Andaman Sea

The Andaman Islands have witnessed an impressive recovery since the 2004 Sumatra earthquake, and feature 16 national parks and four candidates for UNESCO World Heritage Sites in their midst. Don’t miss a chance to embark on an excursion throughout the Andaman archipelago to meet the Moken tribe on Koh Surin during a multi-day adventure, or on a tropical journey to highlights like Elephant Hills, Railay Bay and Koh Phi Phi.

Treat Yourself to a Thai Massage

Thai massages are famously strong, known for masseuses tirelessly kneading away at knots and twists and leaving you feeling relaxed and invigorated. The ancient art of Thai massage draws influence from various eastern medicine traditions and practices, as well as from yoga. If you’re in Thailand, you owe it to yourself to experience firsthand the immensely healing art of Thai massage. It’s even possible to enjoy a traditional Thai massage seaside when visiting the south.

Float the Night Away in Kanchanaburi

Beyond its world-class beaches and thriving urban areas, Thailand’s interior is lush with vibrant jungles, soaring mountains and colourful river ecosystems. Spending a night at The Float House, nestled on the banks of the River Kwai, lets you wake up amidst Asia’s most breathtaking scenery. Kanchanaburi sits about 120 kilometres northwest of Bangkok, and excursions here allow you to explore the region’s rich yet tragic history.