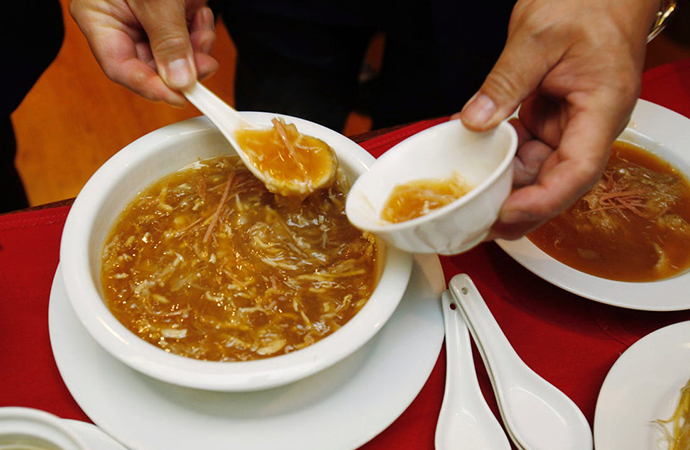 What NOT to Eat in Asia!

What NOT to Eat in Asia!

Travelling is all about new experiences, meeting new people and trying new food. However, there are some foods that you should stay away from, not because they look strange, taste bad, or make you sick, but because they are made from animals that have been hunted to the brink of extinction. While we may agree that you should try new dishes as a sign of politeness, we are also convinced that it is completely acceptable to refuse any meal containing the animals listed below.

What people consider edible or inedible is often culturally determined. While chowing down on a large juicy larvae or a plate full of maggots might be a delicacy to some, others will find it less appealing. Similarly, eating beef or pork might be perfectly acceptable in one culture, where eating rabbit or horse is frowned upon, yet in another culture the inverse might be true. This list is not concerned with what is repulsive or unusual based on cultural preferences, but only with what is morally questionable from a conservation perspective.

Probably the most well-known controversial food in Asia, shark fin soup has been around since at least the Ming Dynasty. Originally a rare delicacy and reserved for the ultra-rich, the rise of the middle class in China and Vietnam has resulted in the dish becoming accessible to millions of people. Needless to say, this is putting ever increasing pressure on already vulnerable populations of shark. Another aspect of why shark fin soup is problematic is the practice known as “finning”. Since the fins are the only valuable and sought after parts, the shark is often definned immediately and the still living shark is thrown back into the water to die a slow death. This process is cruelly efficient and allows fishermen to “harvest” a huge amount of shark fins in a short time.
What NOT to Eat in Asia – Shark

Sea turtles have been a popular delicacy around the globe and as a result they have been hunted to extinction in many areas. Green sea turtles and their eggs are still being consumed in some Asian countries. Sea turtle eggs have traditionally been a popular delicacy in Indonesia and turtle flesh plays an important part of religious feasts in Bali. The turtles became extinct in the waters around Bali and have since been imported from elsewhere. Besides threats from hunting, the green sea turtle is also extremely vulnerable to accidentally being hit by boats, getting caught in fishing nets, and are especially prone to being poisoned by pollution.
What NOT to Eat in Asia – Green Sea Turtle

The giant salamander is an ancient amphibian that researchers claim has remained relatively unchanged for over 160 million years. Despite the Chinese giant salamander being listed as a critically endangered species, it is still considered a luxury food item and is popularly used in the manufacture of traditional medicines. Giant salamanders are also severely under threat from loss of habitat and pollution, as they are extremely sensitive to pesticides and chemicals. The Chinese giant salamander is used in soups and stews. It has a distinctive cry similar to that of a baby and is known in Chinese as the “baby fish”.
What NOT to Eat in Asia – Chinese Giant Salamander
Pangolin

The pangolin is thought to be the most trafficked animal in the world. A nocturnal animal, covered in scales, and with a long tongue used to catch ants and other insects, the pangolin is a sought after delicacy in Southern China and Vietnam. The scales are also believed by some to have medicinal properties, being administered as a cure for cancer and asthma. Breeding pangolins in captivity is extremely difficult, they have very particular diets and require broad open habitats, making conservation difficult. Pangolins that have been rescued from traffickers often die before they can be reintroduced into the wild, as they are very prone to diseases and parasites while in captivity.
What NOT to Eat in Asia – Pangolin

There are many other exciting and exotic foods to try in Asia, which you can still eat with a good conscience and that we are confident you will find much more palatable. Contact us today to learn about our broad range of street food tours or to book your next Asian adventure with Absolute Asia Tours.