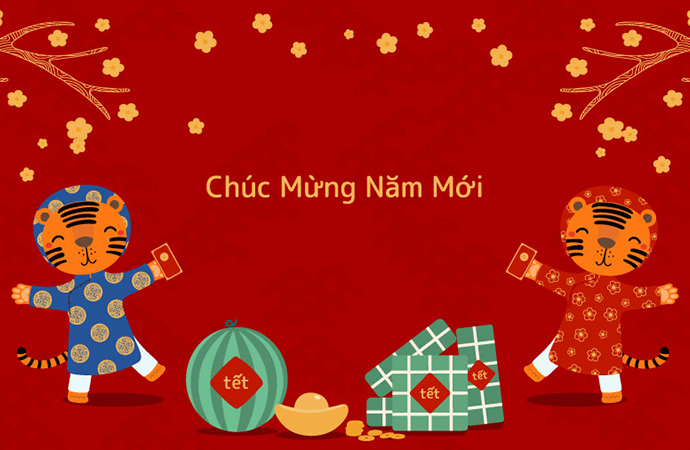 In many parts of the world, the New Year is all about clinking champagne glasses, lavish parties and making (and ultimately breaking) New Year’s resolutions. But in Vietnam, the New Year — called Tet holiday locally — is less about celebration and more about reunion, and is often written off as a time to travel in Vietnam. After all, most of the country’s public spaces all but shut down for the days following Tet, and locals across the country spend the holiday in their family homes.

But in the weeks before Vietnam’s most important holiday, the country is in the midst of preparations for family reunions, long journeys home and age-old traditions passed down through generations. Here at Absolute Asia Tours, the energy and excitement of urban Vietnam during the weeks leading up to Tet holiday is part of what makes it one of our favourite times of the year! We love helping our guests discover the country during Tet holiday preparations, too, since it’s a perfect time to experience Vietnamese tradition and heritage at its most colourful.

These are just some of the things we love about Tet in Vietnam — and what we think makes a journey to Vietnam during this magical time of year so worthwhile!

The History of Tet

Vietnam’s New Year is closely linked to its Chinese counterpart, and much like their northern cousins, each of Vietnam’s lunar years are named after an animal. In the lead up to a new lunar year, the animal symbol of the coming year is woven into the decorations on homes, buildings and ancestral altars.

Despite its close connections to Chinese New Year, Vietnam’s Tet holiday is distinct not only in geography, but in its traditions and history, too. Like almost all Vietnamese holidays, Tet is steeped in tradition and folklore that has been passed down through generations, and these stories are unique to Vietnam.

The Tale Behind the Traditions

The tale centers around a young married couple — named Trong Cao and Thi Nhi — who, after a long marriage, remained childless. After years of ceaseless arguing, Trong Cao is said to have cast out his wife, who goes on to marry a new man named Pham Lang. But after a period of remorse, Trong Cao is realises his fault and sets off on a journey to win back the heart of his former wife. This journey claims the last of his money and eventually forces Trong Cao to become a beggar — but shortly after, he reunites with Thi Nhi by chance, only to spend hours recounting the past with her.

But when her new husband returns home, Thi Nhi instructs Trong Cao to hide in a stack of straw. Tragically, Pham Lang sets fire to the straw in an attempt to make ashes for fertilizing the field, unknowing killing Trong Cao in the process. But in the valiant final moments of his life, his former wife Thi Nhi throws herself in the fire to die with him, leading Pham Lang to take his own life out of sorrow from witnessing his wife’s demise.

As their souls enter heaven, the Jade Emporer takes pity in their story and dubs the three as the Trio Deities, or Tao Quan — Pham Lang as the Deity of Kitche, Trong Cao as the Deity of Land and House and Thi Nhi as the Deity of Market. Together, they look after the well-being of mortals’ homes and property on Earth, returning on the 23rd day of the final lunar month to the Heavens.
Celebrating Tet Today
Tao Quan Festival

The story of the Trio Deities is now central to Vietnamese celebrations of Tet, with the tradition of Tao Quan Festival at the heart of the holiday preparations. Celebrated as a “farewell ceremony” to the deities on the 23rd day of the final lunar month, Tao Quan Festival is perhaps the most significant tradition in Tet celebrations.

On the evening of Tao Quan, Vietnamese women traditionally cook Vietnamese delicacies, clean their homes and decorate their ancestral altars with flowers, fruits, and three votive paper caps — one for each deity.

Alongside altar decorations, a large bowl of water with live carp fish is kept within the home as well, based on the belief that carp (especially good swimmers) are best able to help the three deities on their travels. By releasing them into a pond, lake or river, they transport Tao Quan back to the Heavens. And beyond just the belief that carp have a spiritual purpose, this release also shows respect to animals and is a wish for good fortune in the coming year.
Chung Cake

Much like the tradition of the three deities, Chung Cake is a central element to Vietnamese Tet celebrations. Since Tet is often a time when families reunite at home for ancestral recognition, these cakes are often a part of the traditions surrounding ancestral altars in homes. Invented by Prince Linh Lang during the Hung Dynasty, these cakes symbolising earth have been part of Tet celebrations for centuries.

Shaped in squares and made of a unique blend of sticky rice, rong leaves and mung beans, the iconic “fatty pork” taste of Chung Cake is linked closely with the Vietnamese celebration of Tet. Traditionally they are made within family homes, but Chung Cake is often sold in pop-up standards around the country in the weeks leading up to the New Year.

How to Experience It: If you have a local guide with Buffalo Tours, they will gladly show you where to find traditional Chung Cake, and even show you how to cut it with a bamboo string instead of a knife! Otherwise, Chung Cake is available at many markets throughout the country, but is best when served at a local home.
Spiritual Cleansing

But beyond ancestral offerings and cake making, Tet is the holiday closely linked with spiritual cleansing. Often, this spiritual cleansing goes hand-in-hand with literal cleaning, and the country’s residential homes often descend into a frenzied “spring cleaning” of sorts to rid their homes of clutter. This symbolises a cleansing of the misfortunes of previous years, and starts locals’ lives anew for the New Year.

And just like the homes of locals, many Vietnamese believe that the New Year is a time for not just literal clean slates, but also metaphorical. Forgiveness of misgivings of others is part of this clean slate, and many families and friends will use the Tet holiday as a time to wash away their own sins (as well as others’) in an effort to start the New Year anew.

This same cleaning extends to ancestral altars, which are cleaned meticulously in the lead up to Tet. Since nearly every traditional indoor space has an ancestral altar — with offices, banks, and shops included — it’s likely that you will see uncommonly clean and tidy altars for yourself when travelling through Vietnam during Tet, too.
Altar Decorations and Prayer

More than any other time of the year, Tet marks the season that ancestral altars are at their most vibrant. Traditionally, Tet decorations for altars includes five fruits with five distinct colours. They each represent a different natural element, which in turn are symbols for health, wealth, peace, luxury and longevity.

But most important during Tet is ancestral prayer, which centres around the calling forth of deceased ancestors to celebrate the New Year with their family. This is also a time when Vietnamese locals pray for good fortune in the year ahead, for freedom of past misdoings and health, happiness and joy for their families.

How to Experience It: Ancestral altars are kept within many buildings, shops and residential homes. In the days before Tet, keep an eye out for these altars which will often be decorated with an incredible array of exotic fruits, Chung Cakes and flowers. Better yet, the Tet season is by far the most beautiful time to visit local temples and pagodas, since each will decorate their altars in the country’s most elaborate displays. Head to Tran Quoc Pagoda and Phu Tay Ho in Hanoi and Vinh Nghiem Pagoda in Ho Chi Minh City for the most extravagant displays. You can even ask us to help you visit these pagodas during your customised journey through Vietnam with Absolute Asia tours!

In the days following Tet holiday, most public buildings including museums, schools, shops and restaurants close for celebrations. This often means that the city grinds to a glorious hault for a day or two, which can be an experience in and of itself to see Vietnam’s usually frenetic streets nearly empty. But for most, travel during Tet celebrations isn’t advised as it can limit travel opportunities. The best time to experience Tet traditions is in the weeks leading up to New Year.

For travellers to Vietnam, Tet might be the most illuminating portrait of traditional Vietnamese culture in modern times. A journey through the heart of the country during the magical season promises what will surely be an unforgettable experience!

With a team of local guides and destination experts, Absolute Asia Tours is a perfect way to experience the best of the Tet season like the locals. Contact us to get started in creating a customised tour through Vietnam that will prove an unforgettable experience exploring Vietnam’s most beautiful and spiritual holiday!