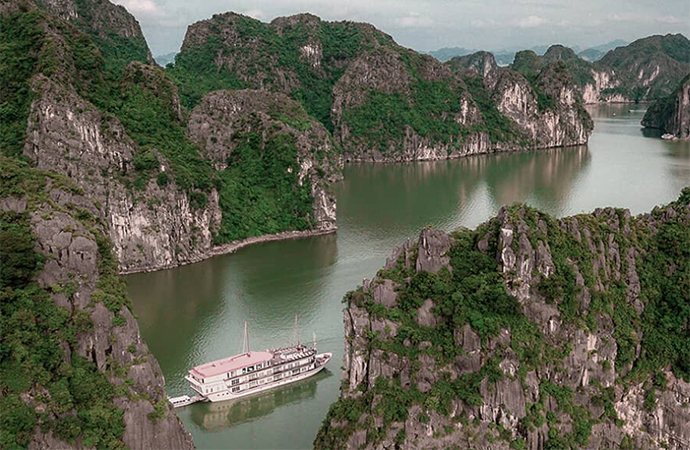 How Overland Journeys in Asia Changed My Perspective on Travel

How Overland Journeys in Asia Changed My Perspective on Travel

How can changing the way you travel, change the way you see the world? Our travel expert shares her story about how overland journeys in Asia changed her perspective on travel.

I remember the very first time I started planning a big trip across Asia. It was Tet holiday in Vietnam, which meant I had two and a half weeks of spare time to plan my very first cross-country and cross-border trip. I had about 20 days to fill – and like most aspiring explorers, my first thought was just how many of my bucket list destinations I could cram into a single itinerary.

Over the span of a few days, I created what could only be described as an absolute whirlwind of an adventure through Vietnam and Cambodia. Hanoi to Hue to Ho Chi Minh City and into Cambodia – I was ticking off no less than eight of my ultimate bucket list spots. At first, that seemed like a great idea!

Until, of course, I considered how much time I’d be spending in an airplane along the way. No less than 10 hours combined on six different flights.

I was no stranger to long-haul flights from hemisphere to hemisphere, but the prospect of huffing to and from airports so many times in a single journey was beginning to eat away at my excitement for the trip. But if I wanted to see everything, how else would I do it?

After some serious contemplation (and a little bit of reigning in my bucket list ambitions) I realized something important: travel isn’t about quantity, it’s about quality. This is a lesson that some travellers don’t learn until they have at least a dozen trips under their belt. Some have a lightbulb moment about halfway through their first time travelling overseas.

For me, it happened when I tore up my initial itinerary and asked myself: what did I want to experience?

The answer? Something real. I wanted to see what life really looked like in Vietnam and Cambodia. I wanted to explore cities and small towns. I wanted to see the highlights and the stuff beyond them. So, I scrapped my original plan with a new goal in mind: if I ditched the planes entirely, what kind of itinerary could I build?

Since then, I’ve been an avowed enthusiast for overland travel. Four years and dozens of overland trips later, these are my favourite lessons learnt along the way.

True local lifestyles are found on the roads less travelled.

This lightbulb moment happened during a lengthy overland trip from Ho Chi Minh City in Vietnam to Siem Reap in Cambodia. I connected the dots with both a boat and a bus, with a few hours’ stopover in Phnom Penh, Cambodia’s capital city. The boat ports and bus stops weren’t exactly travel destinations if I’m being honest, but the things I witnessed between them were well-worth the commute time.

Why? Because while I was lounging back on the deck of a rickety Mekong river boat, I had the rare opportunity to see bustling floating markets, fishermen sloshing through their fish farms, local Cham women washing their laundry in the river, effervescently happy children swimming after our boat and more than few beaming locals waving from the riverbank. I felt like I was watching a country unfold, slowly but surely – and this was a country I had been living in for going on three years!

“While I was lounging back on the deck of a rickety Mekong river boat, I had the rare opportunity to see fishermen sloshing through their fish farms, local Cham women washing their laundry in the river, effervescently happy children swimming after our boat and more than few beaming locals waving from the riverbank.”

The thing is, in a place like Asia, life is happening everywhere. You’ll rarely go through an area that’s completely devoid of human life. Asia is chock full of fascinating rural communities that rarely get to meet outside visitors, mostly because their communities aren’t along a beaten track. Taking the road less travelled means getting up close and personal with people who carry on with their daily lives far from the tourists’ eye. If you keep your eyes open, you’ll come across more picturesque, postcard-worthy scenes than you can count.

Reflection is best enjoyed at a snail’s pace.

Being from the Southwest United States, I have a soft spot for the wide open road. In a country as vast as mine, it’s hard not to find something special about those great big, endless views that only a great road trip can afford. In Asia – after what’s usually whirlwind exploration in bustling cities and frenetic markets – we sometimes forget to take a second to reflect on what we’ve experienced. Thankfully, that’s what those great big open spaces are perfect for.

This was something I learned on a road trip in northern Vietnam, after I’d spent a full week checking off bucket list experiences in Sapa. I had gotten so caught up in the photo-taking and the flurry of the markets here that I’d forgotten to look back on all that I’d seen. Only during a slow, inching drive by bus (staring out of the window the entire way) did I realize how incredible it was to see what I had seen.

“In Asia – after what’s usually whirlwind exploration in bustling cities and frenetic markets – we sometimes forget to take a second to reflect on what we’ve experienced.”

In that time that I wasn’t flipping through my phone, Instagramming every possible thing I could snap a photo of and slurping up every bowl of pho I could find, the impact of the trip really hit home. I had witnessed the lifestyles of ethnic communities that were unmarked on a map a century ago. I’d learned how to paint Batik, I’d talked to a Hmong woman who grew everything she ate and trekked along terraced rice fields that were centuries old. What I’d seen was incredible! A five-hour drive spent gazing out the window at incredible Sapa scenery was when that really sunk in.

I’ve been to my fair share of airports, and never have I had a truly memorable experience in any of them. It’s easy to settle into the comfort of a really great international airport, but let’s be honest – they aren’t travel destinations (though some stopover cities are). Yes, you might be able to get from one city to the next in record time, but what surprises could you have passed up along the way?

I once had the option of flying from Luang Prabang to Vientiane in Laos – a relatively short distance that would have been pretty easy and painless had I opted for the flight. But in a comical combination of poor planning and sense of direction, I ended up making the journey by bus instead. And let me tell you, I’m glad I did!

“I have never felt more connected with a local culture than I did there, in a stranger’s home, not saying a word.”

On a quick stop over at an unassuming little town for a breather, I wandered carelessly into a little hut where a family was making their dinner. Two toddlers were sitting on upside-down wooden stools, making whizzing sounds and sliding them across the dirt floor. It took me a second, but I realized that they were pretending to race motorbikes. Apparently my face showed my excitement, since the mom immediately forgot her vegetable cutting duties, stood up and put her arm around my shoulder with a toothy grin. We stood there watching her kids play for what felt like an hour, in silence. I have never felt more connected with a local culture than I did there, in a stranger’s home, not saying a word.

That was probably the most poignant moment I’d ever had on the road, and it would have never happened had I been in an airplane. So, from this traveller to you: Don’t underestimate the promise of a great overland trip. There are some incredible things waiting for you on the road.

Add something special to your itinerary in Asia with Absolute Asia Tours’ expertly-planned overland excursions – each tour is customised especially for you!