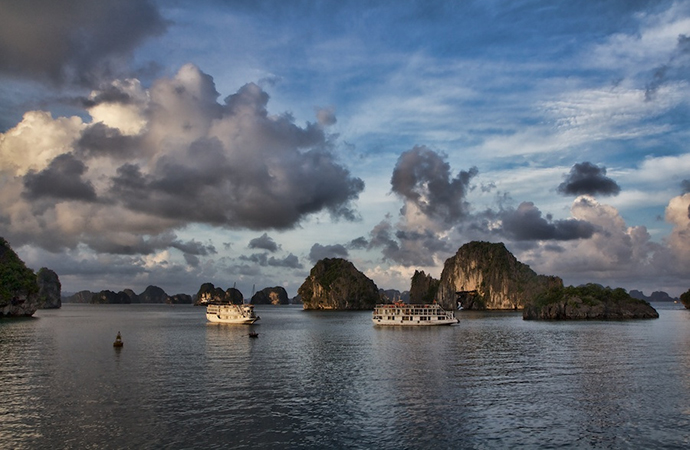 Tucked away on a rather non-descript road in Hanoi’s French Quarter, is Hoa Lo Prison – the infamous Hanoi Hilton. It is a reminder of Vietnam’s bloody past and offers a glimpse into two key periods of the country’s history.

It was by accident that I stumbled across Hoa Lo Prison. On one of my first walks through the French Quarter I came to what looked like any other old French wall, painted in a rich yellow and with some impressive looking stone work. Looking up I noticed things were a little different – an old network of electric wiring sat above a brutal line of broken glass. The side of the wall had what looked like a small watch post built in and the windows were barred. It was all pretty non-descript but clearly wasn’t a place that encouraged trespassers. Walking a little further down the road it all became clear – what I was looking at was the Hanoi Hilton – Hanoi’s Hoa Lo Prison.

Built between 1886 – 1889, Hoa Lo is an imposing beast of a building, with an equally imposing history. When you see the grand gateway with the words ‘Maison Centrale’ arched over the black painted brick, you can sense that this place has a dark history far beyond the decade or so that is was used to house American POWs.

In a city where the French history seems to seamlessly blend into the fabric of life, it takes you back to come face to face with a site that was a scene, and later symbol, of the brutal colonial repression of the early 20th Century. Back in the 1930s the prison held up to 2,000 prisoners in terrible conditions, often political dissenters, or advocates for wholesale revolution. Looking through the barred windows and walking through the stuffy passageways it is somewhat apt that Hoa Lo translates as ‘fiery furnace’. Hoa Lo Street was actually the place to come for firewood before the prison was built here – and it makes you wonder if they picked the location for the name alone.

The stories of the prison during the American War are equally as brutal, and anyone visiting in the hope of discovering more will no doubt leave feeling disappointed. The dusty old air suit of John McCain is a point of interest, but other than that it is probably best to bring your own knowledge to the place.

Foundation of the Country

In the 1990s the prison was part demolished, with only a fraction of the old building kept for posterity. A generation of Vietnamese leaders passed through the gates and it has taken on the role of a kind of shrine to the foundation of the country. For most foreign visitors this all comes as shock – Vietnam’s history for most begins sometime in the 1960s and the colonial period can feel more of an architectural movement than anything else. As with so much in Vietnam there is a whole lot of interest nestling just below the surface and a visit to Hoa Lo could very well be the start of your own research into Vietnam’s fascinating history.

As you walk through the gates and back into freedom, it is strange to see the Somerset Grand Hotel looming over you. Built on the site of the old prison you cannot help but feel that Hilton Hotels has missed a trick – but then again, maybe it’s for the best – the last Hanoi Hilton wasn’t the most desirable address in town.

A visit to Hoa Lo Prison can be included in a Hanoi City Tour with Absolute Asia Tours. See our website for more information.