Dim Sum 101: The Basics for Digging Into a Hong Kong Classic

Dim Sum 101: The Basics for Digging Into a Hong Kong Classic

Thanks to the flurry of internet food and travel blogs, TV shows and international food magazines, there aren’t many people out there that would say they’ve never heard of dim sum. This Cantonese culinary classic is a favourite across southern China, but it’s captured the hearts of foodies around the world – not just because it’s tasty, but because it’s a treat that you could surely call “unique”. But as famous as dim sum is across the globe, this Asian specialty holds a pretty special place in the hearts of Hong Kong locals.

Digging into dim sum in Hong Kong, though, takes some know-how. There’s a culture and a story behind these little morsels of meat and vegetables, and you’d be missing out if you didn’t study up before taking a bite. Before tasting this famous dish in Hong Kong, here’s what every dim sum beginner should know.

There are four main types of dim sum: dumplings, buns, meats and rolls. You’d be missing out if you didn’t try a bit of each, but here’s the basics for each type.

Dumplings If you’re into something chewy, salty and filled with meaty, vegetable goodness, then dumplings are the way to go. Some dumplings are pinched closed at the top while others, like siu mai, are open. Both types of dumplings, though, tend to be heartier and heavier than the other types. Some favourites are har gau and chiu-chao fan guo.

Buns For something a little lighter than dumplings, buns are a great alternative. These puffy pastry-style morsels are chewy and filled with meat and veggies like dumplings, but skip the density for a doughy consistency. Some varieties, like cha siu bao, are even glazed with a sweet, shiny outer layer. Try cha siu sou for something decidedly sweet in the lineup.

Rolls With an entirely different size and shape, it’s sometimes hard to imagine that the roll variety of dim sum is dim sum at all. Most are covered in a thick rice noodle wrap, but stuffed with the same kinds of meat and vegetables that other versions are. For some tasty versions, try cheong fan, zhaliang and pei guen.

Meats Served in the same lightweight boxes in small portions just like other dim sum, the meat-based versions of dim sum are quintessentially southern Chinese. Some favourites are fung zao, or fried chicken feet (you read that right) and ngao yuk kau, or meatballs. 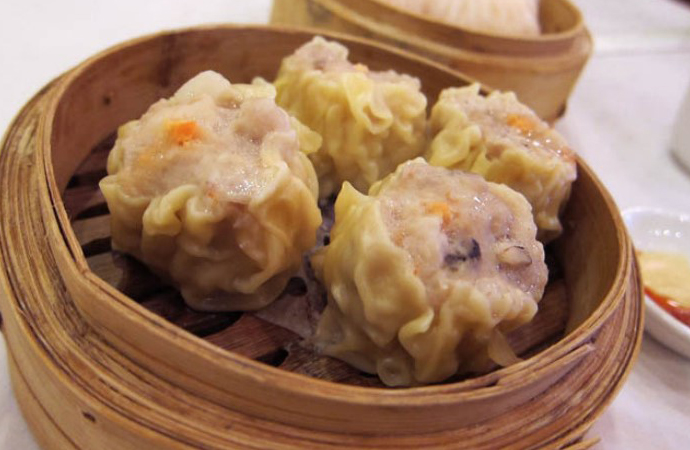 Despite popular belief, there’s a difference between dum sum and yum cha. The easiest way to distinguish between the two is to consider dim sum the food, and yum cha the tradition. That’s because, while dim sum are all of those tasty dumplings, buns and rolls mentioned above, yum cha is the tradition of drinking tea along with your food. That’s also why locals will often refer to going out to eat dim sum as “yum cha“, or simply “drinking tea”.

The moral of the story is this: Good dim sum is only good when it’s enjoyed with some old-fashioned Chinese tea. The bitterness of the tea will help balance out the sweet fattiness of the dim sum, and makes it easier to cleanse the palette between each sampling.

The Deal with the Cart

Traditionally, dim sum isn’t brought to your table like a normal restaurant order – instead, it’s whipped up by the chef and small portions are place in round, closed “boxes”. This keeps the dim sum warm and ready to eat, and these are stacked in a cart that’s wheeled around the restaurant. The trick to ordering is waiting for the cart to come to you – from there, you can point at the ones you’d like, or simply nod “yes” or “no” as the waiter lists the options.

While most of the time it’s best practice to stay put until it comes to you, if you spot your favourite dish on another cart that’s moving away, it’s alright to get out of your chair and jog over to it. Better yet, don’t be afraid to try some of the other stuff on the cart you might not be familiar with – there are dozens of varieties of dim sum that are all worth a try.

Like a lot of dishes that have gained new popularity with foreign visitors, dim sum went from being a breakfast or early lunch dish to an all-day, all-the-time treat. The important thing to know about dim sum, though, is that it’s traditionally more like a snack or small meal than a three-course dinner. That’s part of why dim sum is usually enjoyed with tea, since this helps aid digestion but keeps things feeling light and tasty.

This kind of “light eating” is a favourite pasttime of Hong Kong locals, who will often mix up their daily routine with a quick nip out to their favourite dim sum locale between meals. No matter what time of day you enjoy dim sum, you’re in for a tasty adventure into traditional Hong Kong culture and food – just make sure you dig in like a local!

Get a taste of Hong Kong’s best dim sum on a Hong Kong Heritage tour, or during a Hong Kong island tour. Better yet, make it a multi-country journey and create a custom itinerary through China and Hong Kong.