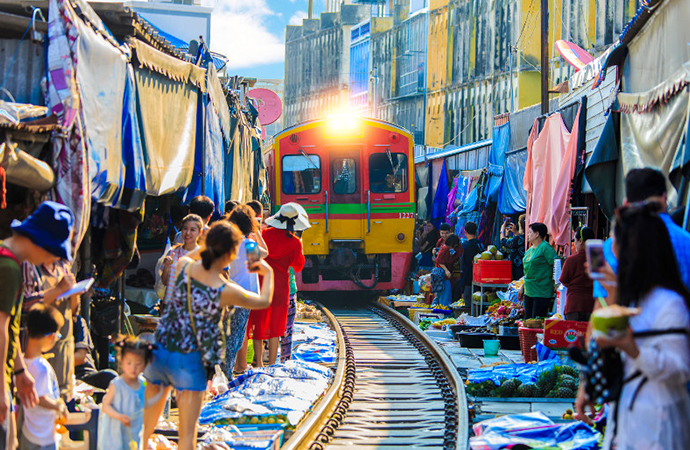 Beyond the Highlights in… Bangkok, Thailand

Beyond the Highlights in… Bangkok, Thailand

In the dynamic, vibrant Asian region, the highlights are just the beginning. Beyond the UNESCO Heritage sites, the ancient monuments and historical landmarks, Asia’s top destinations are cultural hubs worthy of going beyond the surface. Joshua Zukas is a Southeast Asian destination expert with just the right insider knowledge behind Asia’s highlights. In this in-depth series, discover what’s waiting beyond the obvious in Asia’s top spots.

Formidable Bangkok is undeniably a place of contrasts; a city bursting with modernity and yet still steeped in tradition. Here, you’ll sometimes find yourself speeding through the city on the sleek sky train while glancing up at the almost dystopian skyline, or peering down at the occasional ramshackle wooden house. Move gently along the river in the shadow of fabulous five star hotels that, despite their enormity, still fail to outshine the gorgeous Thai temples that glisten in the sunlight.

Upon closer inspection, these contrasting elements don’t compete with each other, but rather compliment one another. The city’s gloriously modern public transport system still reserves the prime seats for the huge number of orange robbed monks that care for the temples and monasteries; and shrines to the revered royal family can be found in even the priciest shopping malls.

“Many worthwhile neighbourhoods [in Bangkok] are completely missed, and it is surprisingly easy to slip through the cracks and explore something extraordinary even in the city’s most heavily visited areas.”

Bangkok – which is, arguably, the gateway to Southeast Asia – has been welcoming visitors for centuries, and recent political upheavals have only highlighted that city has an undeniable draw and remarkable resilience. People still come each year by the millions. In terms of going beyond the highlights, Bangkok’s massiveness works to the city’s advantage. Many worthwhile neighbourhoods are completely missed, and it is surprisingly easy to slip through the cracks and explore something extraordinary even in the city’s most heavily visited areas.

I could write for days about getting off the beaten in this great city, but I’ll focus on only two main areas: Chinatown, which is frequently visited but rarely properly explored; and Klong Bangkok Noi, a lesser-seen area that is hugely deserving of more attention.

Chinatown exemplifies just how much there is so much to discover if you scratch beneath the surface in Bangkok. Often featured on whistle-stop tours of the city, Chinatown offers so much more than what most people get to see, and is worth a fair few hours of aimless wandering and shameless face-stuffing. But since every aimless wander needs a starting point, begin your journey with a coffee on Phat Sai Street, a short walk from Bangkok Railway Station and Hua Lamphong MRT.

Along this colourful street you’ll find Eia Sae, one of Bangkok’s only traditional coffee houses, which has existed at its current location for decades. Chinese immigrants were big coffee drinkers and traditional cafes can now be found in Chinatowns across Southeast Asia from Georgetown to Jakarta. Eia Sae gets most of the attention, but there are one or two more along the street so take a stroll up and down and see which one catches your eye.

The alleyways of Chinatown make the neighbourhood one of the few areas in Bangkok that can only be explored on foot. Walk down Yaowa Phanit, for example, and enter into a rabbit warren of intertwining alleyways, many of which hold hidden Chinese temples and ancient clan houses. Make sure you make your way through to the Pei-ing School on 831 Songwat Road – this European architectural beauty was established almost a hundred years ago to cater for the children of wealthy Chinese merchants.

Last but certainly not least: food. Food is everywhere in Chinatown, and many of your favourite Thai dishes may well have Chinese origins. While you could spend a few days with your nose in a guidebook tracking down the best places to chow down on the neighbourhood’s best dishes, a Chinatown street food tour through this fascinating area is as culturally rewarding as it is deliciously memorable – and it saves you plenty of time. Doing so is an absolute must for cuisine enthusiasts.

For a city that once went by the nickname ‘Venice of the East’, first time visitors are sometimes shocked (and appalled) that, save the Chao Phraya River, there isn’t much water in Bangkok. But actually… there is! You just need to find it, and escape the central attractions.

The best place to get to grips with Bangkok’s watery underbelly is in Bangkok Noi District, where several canals snaking into multiple directions makes for a strange but fascinating scene. Wooden houses are seemingly built half on land and half on water, and the noisy traffic that engulfs much of central Bangkok seems to be a world away. Along the Klong Bangkok Noi, you’ll get a feeling of what Bangkok may have once looked like many centuries ago.

The local atmosphere in this neighbourhood is unsurpassed, so it shouldn’t be surprising that this part of town makes for great temple hopping. They may not be as imposing as Wat Arun, or glisten quite as brightly as Wat Pho, but what the temples in the area lack in fame they make up for in quiet charm. Mostly small and understated, these temples see very few tourists and thus serve completely as places of worship. Temples can be found on both sides of the estuary, but a particularly interesting cluster, which includes Wat Mai Yai Paen and Wat Mai Yai Mon is possibly the best in the area.

Go beyond the highlights in Bangkok with an in-depth, guided tour through both city highlights and hidden gems. Make a Unique Bangkok City Tour part of your Thailand journey – or customise a multi-day journey through Thailand and beyond!