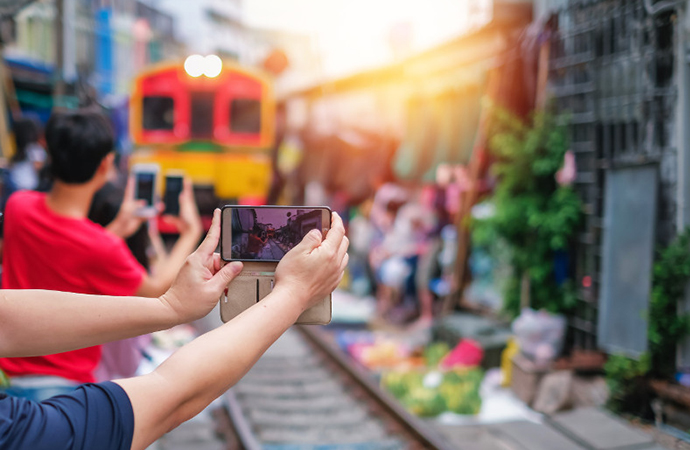 Think you’ve seen all that there is to see in Thailand? Think again! Our resident Thailand expert uncovers the top 15 reasons why you simply haven’t visited Thailand until you’ve explored Isaan, it’s least-visited and most fascinating region.

Thailand is such a great travel destination, in fact, that it has long held one of the highest rates of return-visitors in the world. In 2014 Thailand attracted nearly 25 million tourists and is projected to attract more than 28 million visitors by the end of 2015. Statistically speaking, 50% of those tourists will return for another go of Thailand at some point in their lives. That’s a pretty telling statistic. People love Thailand. Isn’t it ironic, then, that Thailand’s largest region – accounting for nearly one third of its landmass and one third of its population – is also the least visited?

Very few people, outside of those who have either lived in Thailand or spent a significant amount of time there, have ever even heard Isaan. Many of those who do know about it tend to discredit it as a poor area lacking in the sort of splendor found elsewhere in the country. Nothing could be further from the truth. Even if you’ve visited Thailand a thousand times, here are fifteen reasons why you haven’t really experienced Thailand until you’ve been to Isaan.

It’s the largest region of Thailand.

With more than 160,000 square kilometers of land, Isaan is nearly half the size of Germany and one third the size of Thailand as a whole. While the region does rely upon agriculture heavily, there’s more to the region than rice paddies. Landscapes you’ll find there range from dense tropical rainforests to rolling prairies, to arid grasslands.

Nearly one third of Thailand’s population is from Isaan.

With over 20 million people residing in Isaan, and untold numbers of “Khon Isan” (People from Isaan) residing elsewhere in the country, roughly one third of Thailand’s population hails from the region. As such, the influence of Isaan on Thai culture cannot be underestimated. The only way to really understand Isaan culture (and Thai culture) is to go to its source.

It’s home to some of Thailand’s most vividly delicious food.

With substantial Khmer and Lao influence, Isaan is home to some of Thailand’s most interesting and ethnically diverse dishes. It isn’t for the faint of heart, though. Even among Thais, who are famously adept at eating spicy food, Isaan food is known to be particularly fiery –so be careful! Anyone who has been to Thailand or eaten Thai food will instantly recognize Papaya Salad or “Som Tum.” It’s one of the country’s most pervasive dishes. While you’ll find it throughout the country in various forms, it is in facty an Isaan dish. As is the case with any ethnic food, if you want to have “real” Papaya Salad, you have to have it where it comes from -the spices and flavours will knock your socks off!

The drinks aren’t too shabby either!

One of the pleasant surprises you’ll find in Isaan is the bizarre and wonderful assortment of ethnic beverages on offer. Throughout the region you’ll find roadside stalls full of urn-like earthenware jugs brimming with what appears to be toasted sticky rice. Upon further inspection you’ll find that by plunging a wooden straw into the jar’s contents, a dark syrupy liquid will erupt from the surface.

This is Lao Hai, a curiously delicious and mildly sweet rice wine that’s dirt cheap and packs a surprisingly powerful punch. Adventurous drinkers will also discover the likes of Kaw Nam Lak, an alcoholic beverage made with orange juice and fresh chilies, and Lao Lao, a strong rice-whisky that’s commonly served as a cocktail named after the Pygmy Slow Loris –a slow moving animal native to the area that partakers of this drink are said to mimic after indulging themselves in it.

The architecture will blow your mind.

This one may shock some people. In a country riddled with magnificent temples, it’s no small thing to say that Isaan is home to what is probably the country’s most impressive architecture. One look at Wat Phra Maha Chedi Chai Mongkol will validate this statement, and then some. To find architecture that is as visually stunning, or expansive, you’d need to look at places like India’s Taj Mahal or Myanmar’s Schwedegon Pagoda. It really is that impressive.

Nestled in the rural landscape of Roi Et (“One Hundred and One in Thai) province, the temple is built upon 101 rai of land, measures a staggering 101 meters in length, and is 101 meters tall. Every inch of the temple complex is littered with intricate sculptures and artwork. And that’s just the beginning. If that isn’t reason enough, Isaan is also home to the Thailand’s tallest standing Buddha statue at Wat Buraphraphiram, and a multitude of other, equally impressive, structures.

It’s home to some of Thailand’s (and the world’s) most amazing wildlife preserves.

This one may also come to a shock to the uninitiated. Animal and nature lovers visiting Isaan’s Nakhon Ratchasima province will discover what may very well be one of the world’s premier destinations for observing wildlife in Khao Yao National Park. Covering an expanse of over 300 square kilometers, its Thailand’s oldest nature preserve and its third largest national park.

Within the park confines you’ll find more than 3000 species of plants, 320 species of birds, and 66 species of mammals –including wild elephants, bears, and tigers. It’s one of the few places in Asia that you can go where you are virtually guaranteed to see “real” wildlife –not just a spattering of small birds and lizards. The park is literally crawling with Sambar deer and other creatures.

It has some pretty crazy landscapes.

Just in case you thought that Isaan’s landscape was boring, it happens to be the home of the so-called “Grand Canyon of Thailand.” Near the border with Laos, in the furthest reaches of the Ubon Ratchathani province, it’s a vast river gorge that’s reminiscent of a Martian landscape and well-deserving of the colloquial title endowed to it. Sam Phan Bok is one of the most unique landscapes in Thailand, and if there is anything that is slowly putting Isaan on the tourist map, it’s it.

The region has history…a LOT of it.

Isaan is considered by many to be the cradle of human settlement in Thailand. Isaan has so much history, in fact, that human settlement in the area predates our own species! Homo erectus fragments have been found scattered throughout Isaan and, even to this day, the evidence of their presence can be found in the form of some of Asia’s most incredible cave paintings at Pha Taem National Park and Hua Mountain.

Historically, Isaan is also one of the most contested areas of country. Nestled on the Korat Plateau, squarely between the influence of Laos, Cambodia, and the rest of Thailand, Isaan has been the rope in a tug-of-war match between these feuding kingdoms for millennia.

Although Isaan people are proud of their unique heritage, and will fiercely defend any accusation that they are somehow not Thai, the vast majority of Isaan people are ethnically Lao. Even the language spoken in the region, Isaan, is so closely related to the language of Laos, that it is mutually intelligible. There are also significant parallels in the cuisine, music, and other cultural elements. What makes Isaan culture distinct, however, is the fact that it is an amalgamation of the three cultures that surround it –Thai, Laos, and Khmer.

The south of Isaan, near the border with Cambodia, is home to the region’s largest ethnic minority, the Khmer-Isaan. Known by locals as “Jungle Khmer,” these people were immigrants from remote northern outposts of the Angkor Kingdom. Having settled in areas surrounding Surin, in southern Isaan, centuries ago, they retain cultural elements of their Khmer heritage and are also able to speak Khmer. Like the Lao-Isaan people, though, they are also adamantly Thai.

You can’t help but be entertained by the music.

If there’s one thing that Isaan people have in common with their Thai brethren, it’s their light-hearted nature and fondness of having a good time. This will become abundantly clear as soon as you encounter locals listening to the upbeat and contagiously “happy” local music. With influences from both Laos and Cambodia, the music has a decidedly “ethnic” flair to it, and the style of dancing does, too.

If you’re in a social atmosphere and a local hit comes on, be prepared for one of the most hysterically entertaining performances you’ve ever seen. Young and old people alike are not averse to erupting into bouts of smiley arm-flailing whilst bobbing up and down in a dance that will have you bent over laughing and attempting to do the same.

They say that a tourist comes to see while a traveler comes to experience. If you relate more with the latter category, Isaan may very well be one of the most magical places in Thailand. Because so few tourists ever go there, Isaan truly is the Thailand’s “last frontier” when it comes to places that have more or less escaped the influence of modernity. While Thai people can fairly be described as friendly and congenial anywhere in the country, this is especially true in Isaan.

Quite simply, as a foreigner, you’re a novelty in Isaan whereas elsewhere in the country locals are more accustomed to seeing people from all over the world. You can expect to get a few inquisitive stares, and it’s entirely likely that locals will approach you to have their picture taken with you –usually a great indication that, as a traveler rather than a “tourist,” you’re in the right place.

Although Isaan is home to Thailand’s fastest growing economy, it’s still the country’s poorest region. This fact, combined with the fact that it sees so few visitors, means that most things can be found at an incredible value. Compared to the likes of Phuket, Pattaya, or other major tourist hubs, visitors to Isaan will find that prices are amazingly cheap and the culture of exploiting tourists for money is amazingly absent.

Flying to the region’s largest hubs, Ubon Ratchathani or Udon Thani, Isaan is just short hop away from the frenetic urban chaos of Bangkok. From point to point it’s about a 45 minute flight that isn’t likely to set you back more than about $30, both ways.

You can’t say you’ve “seen it all” until you’ve been to Isaan.

If you have a couple of days to spare, there’s almost no excuse not to visit this beautiful and friendly region of Thailand. If you love Thailand, or even if you’ve never been before and want to say that you’ve had a unique experience, Isaan is literally one of the best experience you can have in the country. No matter how many times you’ve been to Thailand, you can never say you’ve “seen it all” until you’ve been to this jewel of a region and experienced it firsthand.

Explore the very best of incredible Isaan on an in-depth Isaan region tour of this lesser-visited region. Make this a part of your customised Thailand itinerary for the very best of the country in a single, enchanting journey.